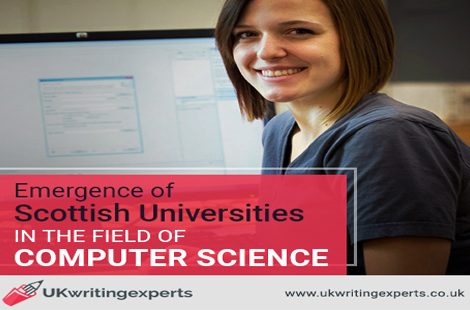 Emergence of Scottish Universities in the Field of Computer Science

Computer Science has been observed as an emerging field for higher education students in Scotland. Considering today’s day and age this is undoubtedly a very good sign for a small country generating roughly a GDP of $250 billion and Per Capita Income of $45,904 yearly. Major industries in Scotland include biotechnology, banking services, construction, edification, entertainment, financial services, oil & gas, tourism, transport equipment, and whisky.

This gradual movement towards computer science development is considerably observed as an improvement for the country. The population of Scotland is around 5.5 million people, out of which 99% are literate and more than 90% of higher education students are studying in Scotland. As far as computer science is concerned, the following universities in Scotland are renowned for their excellence globally:

There is no doubt that the future of our world lies in STEM (Science, Technology, Engineering, & Mathematics). For this reason the importance of computer science education increases exponentially as 10 years ahead in the future its need will become undeniable. Ever since our world became ubiquitous with regards to computers and technology, a fundamental know-how is predominantly required for the younger generation as critical needs of today’s world.

The Education Scotland, government executive agency responsible for the country’s quality of education, over saw this new trend and were quickly able to adjust their curriculums as per the requirements of the new age. ES is also tasked with improving the quality of professional learning and leadership along with stimulating creativity and innovation for its student population. As of now they stand on safe grounds by showing their urges to move ahead into the world and make computer science education available for students’ learning and professional development.

Statistical reports are providing enough evidence to prove that this move by Scotland is indeed beneficial, as more and more students emerge with their qualifications for computer science the chances of a brighter future for Scotland increase as well. It has been estimated that by the end of the next decade the occupations and projected concerning computer science will expand by 22%. Even though health care is considered the most vastly increasing filed for today, interestingly the major positions and job opening s for the industry are also related to IT and respective fields.

On the other hand it is also a well-known fact that computer science graduates are able to earn higher salaries, and with major job prospects out there, it is also considered as the fastest growing industry. The benefits of computer science education are numerous and with the ES supporting the students to develop their skills and professional aptitudes for the industry, there is no doubt that Scotland will have more to offer in coming years. If you want to be a part of Scottish educational system then why not let UK Writing Experts guide you for your admission essays. We provide you with astounding write-ups to inspire and impress your superiors. Just drop us an email at info@ukwritingexperts.co.uk, and let us handle the rest.

← Guidelines for Solving a Case Study
What Are The Suitable Words You Can Choose For Your Essay? →